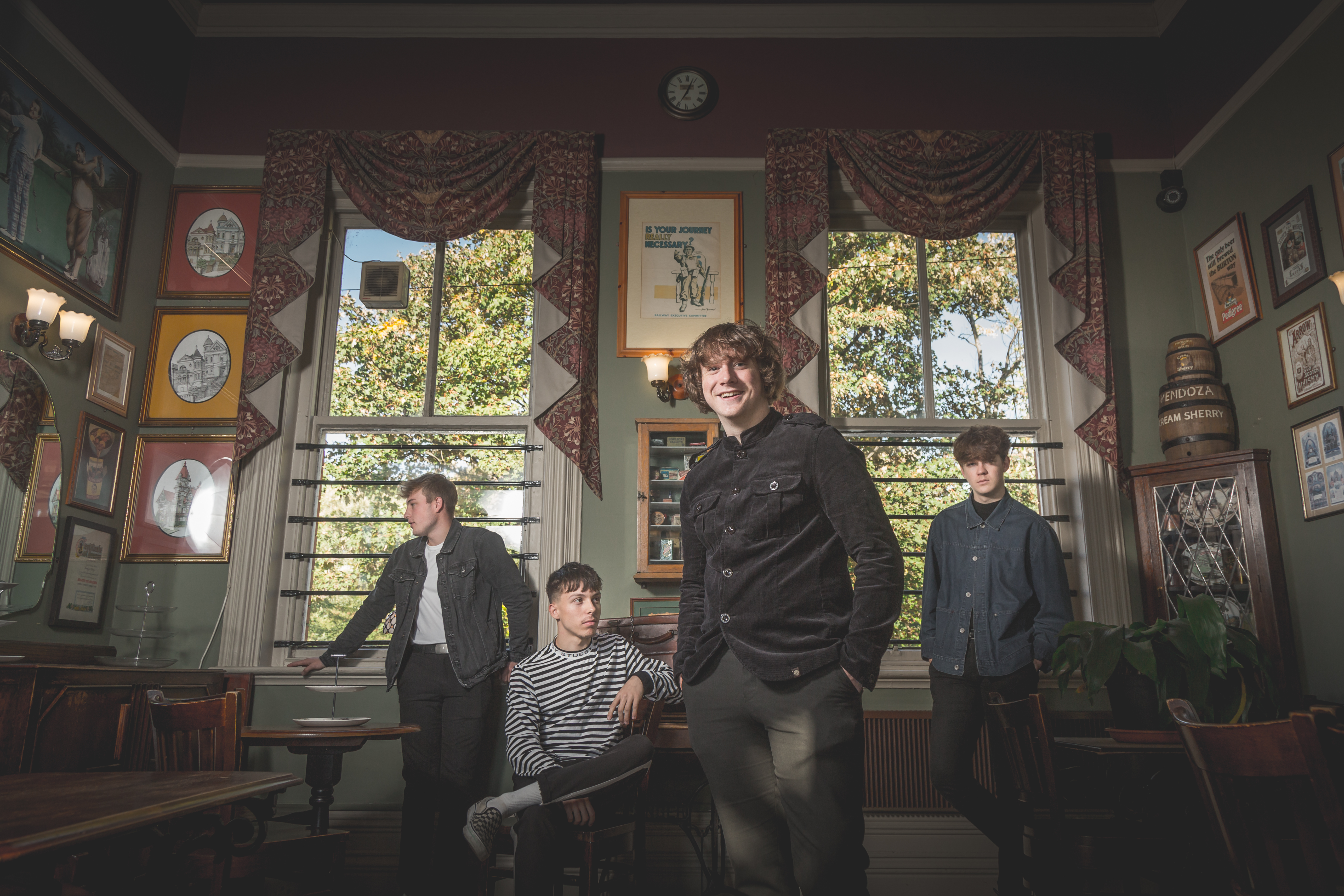 North Manchester has been a hot bed of brilliant and influential bands for a good few decades now, the latest rising stars in the ascendancy to emerge from the area are the superb Callow Youth. The fresh young four piece band formed over little more than two years ago are garnering admirers rapidly – Steve Lamacq has just made them his recommended choice over on his BBC 6 music show. They are ones to watch in Minehead and could be a lot more known name by the time by the time November arrives.

Can you give us some background behind the band and the forming of Callow Youth please?

Tom and Alfie have known each other since primary school in Ashton Under Lyne, Nathan and Connor were mates at High School in Failsworth. Nathan met Alfie through football and realised they both had similar taste in music and fancied being in a band. Alfie brought Tom along and Nathan roped in Connor to play drums – he had never touched a drum kit before, he got hold of one and we had our first rehearsal in April 2017. To start with, we tried covers of our favourite songs, that went well, but we decided that we would only do our own songs going forward as we didn’t want to be a covers band.

By November 2017 we had enough songs to record a demo and we had met a manager who got us in the studio in Jan 2018 to record some demos. Out of 5 tracks we did that day, we were happy enough with 3 of them to release them, so we could see what people thought. The response was great and we played our first gig in May 2018 and we’ve been mad busy ever since.

What are Callow Youths influences inspirations and listening pleasures?

Initially The Strokes, Joy Division, New Order, Catfish were some of the bands we did covers of, but we’re all massive music fans, all with our own tastes so its hard to nail it down, We all have Spotify lists on the bands Spotify account. Connor loves his Hip Hop – Tyler The Creator, Barry White, as well as guitar bands. Tom likes a lot of 80’s pop and Burt Bacharach, as well as current bands. Nathan is a big fan of a lot of Manchester bands named above and the Smiths, the Sherlocks, The Blinders. Alfie’s biggest lyrical Influence was The Streets but he’s also into some Northern Soul tracks and Echo and the Bunnymen.

Two singles in and a phenomenal reaction – single of the week on XS Manchester and vocal support from a few Manc music legends like Clint Boon and Mike Joyce , as well as some top line ups like the recent Cabbage gig I saw you at – I guess it’s all going to plan?

Yeah, it is going to plan, but you have to work really hard for everything. We leave the planning to our manager and stick to writing the songs and playing the gigs, but it’s all about writing the best tunes that we can, then getting them heard by people and building a following, not just in Manchester, but all over the UK and in other countries – if you have music that people want to hear then its easier to do that now that its ever been, with social media, streaming and all that. We have worked really really hard, done over 40 gigs in a year since our first one and its paying off, people are listening and watching us and the stuff we are writing now we think is just getting better and better.

It’s been a steep learning curve and 3 of us have been at college doing A Levels at the same time.

There haven’t been any shortcuts though, we have worked hard and earned all the attention we have been getting. Jim, Joe, Matty and Clint at XS Manchester have been really supportive – getting 2 singles of the week on the trot was a real buzz. In the last week we’ve been getting plays on the BBC and we just heard today that Steve Lamaqc is playing our new single Wake Up on 6Music tonight – we’re buzzing!

What are the plans for the immediate future – is there a album in the pipeline & further plans to work again with producer Gavin Monaghan(Editors-The Twang-The Blinders-The Sherlocks)?

We have been working with Gavin since doing Wake Up with him, he’s a lovely guy to work with and so is Joe Murray, who works alongside him. They really seem to get what we do and Gavin has so much experience producing so many great artists, it’s a privilege to be working with him. He’s based in Wolverhampton, so we have to fit in sessions between revising and taking A level exams and work. It’s going really well and doing it over a period of time seems to be working well for us too, as the songs are developing all the time, so were able to make changes as we work towards finishing the songs. We have enough tracks for an album and that’s what we are planning but nothing is fixed yet as to how we will release them.

Looking forward to playing the Shiiine On weekender & any one on the line up you hope to catch?

It’d be nice to meet Lammo and Mike Joyce and say thanks for the radio plays!

Bands wise, loads – too many! We’re only like 18/19 years old but we love loads of music going back years – our mums and dads all have great taste in music. Rev and the Makers, Embrace, Cast, Wedding Present, Idlewild, PWEI stand out, Membranes, Bob Mould, Shadowparty too. It’s a mega line up, so we’ll catch as much as we can.