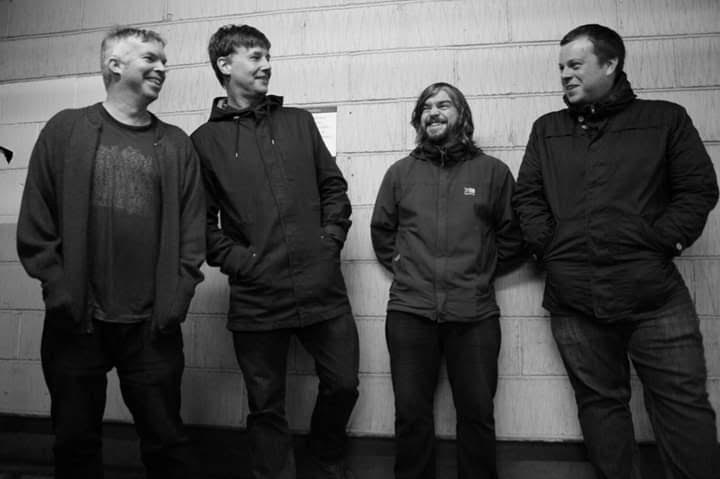 Your sound is described as “Punkasuals” on the biog – sums it perfectly to me, North Manc swagger and songs with angular guitars and an abrasive sound, was it a plan to explore a punk sound like you influences or something that came naturally when the four of you got together?

Yeah we are Punkasuals. Smart clobber with a smart state of mind. When me and Si started writing the songs together, we decided right from the off that we wanted an high energy, guitar driven sound that was laced with melody and big catchy choruses. Songs that you can sing along to while you’re being smacked in the face by the music.

The songs on ‘Turn It Up’, are they a whole new set of songs you wrote together as a band?

Si and me have wrote the songs we’ve recorded as a band so far. They are all new songs and usually him or me, will have the initial idea that we’d work out on his acoustic guitar in the pub together and I’d write the lyrics on beer mats, he’ll go home and do a rough demo and we’ll then take it to the practice room. Neil and Keith will have a listen and join in adding their own flavour into the mix. Or, Si will send me an idea that I’ll work on and again we’ll take that to the practice room.

Uniform my favourite on the album (as well as Never alone) and the one that caught my ear at Shiiine last year, can you tell me some more & the story about that one?

‘Uniform’ is bits of true similar stories I’ve either read, seen or heard, all put together. The ‘Uniform’ I speak of isn’t a particular set of clothing worn by only certain people. But more of an ‘invisible cloak’ as I see it (literally) that is worn by any oppressor, bully, liar, fake or coward etc. It’s a metaphor. I liken it to The Emperors New Clothes. Anyone with half a brain, can see right through them.

Who does the bands artwork, particularly the album cover and the headphone picture?

Simon did the black and white front cover of the album. I think it’s something he pinched off the Internet? It is once again, a one man stand (could also be a woman) against anyone who expects us to conform to their uniform.

Bob McGowan is a fan and friend of the band, he’s an unemployed artist from Manchester and he did the coloured ‘headphone’ artwork on the CD. Me and Si gave him a few prompts, but it’s all down to Bob really. I think it looks great, he did a fantastic job

A few gigs coming up in the next month – Hometown gig at Rebellion in Manchester followed by Shiiine On again. You had a top reaction last year are you looking forward to it?

Yeah, we got a great reaction for an unknown band there last year. This year hopefully should be even better, as people have had a chance to listen to the album and get more familiar with us and our sound. Shiiine On is without doubt one of the best festivals around and ran by top people. We are buzzin’ to be playing there again this year.

Time for action in the future… Is there anything planned in the new year we can look forward to?

We’ll be writing and recording more songs and would love to play in a city near you soon. Turn It Up!