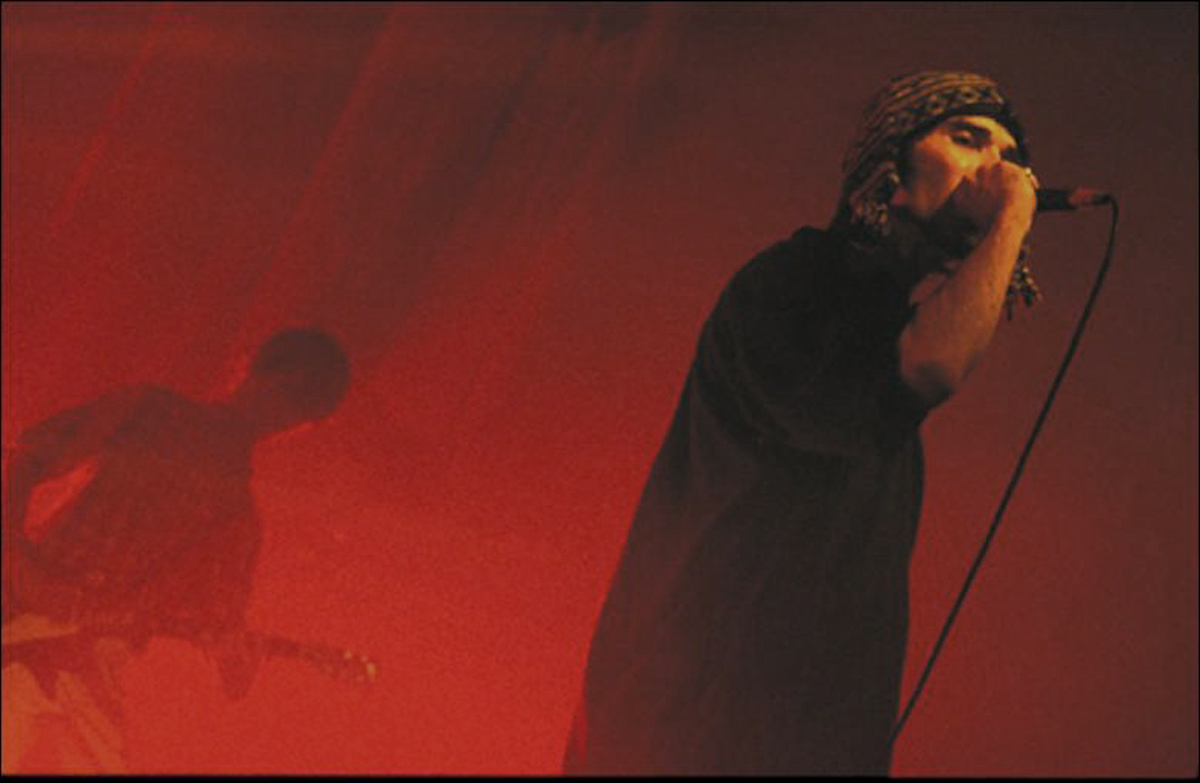 Mark Benney is now a retired photographer with an impressive CV shooting some of the world’s biggest bands including Foo Fighters, The Stone Roses, Buffalo Tom and many more. Here Matt Mead interviews Mark about this time behind the lens plus we have an exclusive gallery of some of Mark’s work including never before seen pictures of The Stone Roses at their UK gig at Bridlington 1995

MM: Can you tell me what your first memory was?

MB: Watching tree shadows on the bedroom wall at night at the age of about 2!

What was the first music you can remember hearing?

Chubby Checker – The Twist – when it was re-released in 1962

What was the first serious music you can remember hearing?

How did you first get into photography?

Did you always want to get into music photography?

Who were some of the first bands you shot?

How did you get into photography as a profession?

It was never really a profession for me and I never did it full-time! I bombarded Sharon O’Connell and Jim Arundel at Melody Maker with pictures until they finally gave in and gave me a chance – my first live job was Done Lying Down at, I think, the Camden Falcon in 1992

You shot for Melody Maker and other magazines. How did you get to work for the different publications?

My first ever publication was in the NME – Bill Pritchard at The Dome Tufnell Park. I mainly freelanced for Melody Maker and occasionally got other jobs via referrals from my agency, Syndicated International Network. Also pictures were sometimes picked up on an ad hoc basis by publications such as Daily Telegraph, Metal Hammer, Mojo, Outlook, Top of the Pops and Vox. I also got the chance to shoot The Dust Brothers (aka Chemical Brothers) and the Aphex Twin for my brother’s magazine Jockey Slut.

Did you get to pick and choose the sessions and gigs you went to or did have a rota to stick to?

Photographers at my level had no control whatsoever, although if you were lucky you might get a commission on the basis of your own suggestion. But it was usually dictated by agreements that had already been made between the paper and the bands’ PR agents. And if you’re asking whether I was able to suggest a trip to Seattle to shoot Nirvana(!) the answer is “no”!

What are your 5 favourite gigs you’ve been to and shot?

Tough question! (1) Urge Overkill supporting The Breeders in Glasgow October 93 followed by staying up all night with Kim and Kelly in the hotel bar; (2) Levitation at The Venue, New Cross 92 – possibly the most incendiary gig I’ve ever been to; (3) Foo Fighters King’s College London 95(?) – first indoor UK appearance, I think (saw them at Reading Festival that summer but didn’t get photo access) – original lineup including Pat Smear; (4) Stone Roses December 95 Bridlington, mainly for the “rock n roll experience”; (5) Therapy? – too many times to mention but always good value for money, especially at The Grand in Clapham Junction

Did you shoot any memorable sessions with bands?

I was mainly a live specialist – remember this was when Kevin Westenberg, Tom Sheehan, Pat Pope and Kevin Cummins were dominating the weeklies – but I had a great couple of hours shooting Steve Albini’s Shellac while they were recording 1000 Hurts at Abbey Road Studios in 2000. Also enjoyed a brief session with Michael Gira (Swans) on a London rooftop in 94 or 95

The pictures that you have supplied, can you supply some details to them?

Foo Fighters – these were taken at the Manchester Academy during the In The City event in 95.  I’ve cooled on the Foo Fighters in the intervening years but at that time they were awesome.  Being in the photo pit felt like being in that old Maxell tape advert, where the guy is pushed back in his chair by the sheer force of sound…  On second thoughts I think the Pat Smear pic was done at the Kings College gig I mentioned before but the Dave shots were definitely Manchester.

Buffalo Tom – a great gig at the Wulfrun Hall, Wolverhampton.  I seem to remember I was the only snapper in the pit and the security was very laid back, which was very unusual.  So I was able to climb up on the edge of the stage and get some great angles.  Also the lighting was terrific.  The stars very rarely aligned in such a way.  I really loved BT at that time and was able to hang out with the band in the dressing room afterwards.  I kept snapping and Bill Janovitz was very concerned when I took a shot of his guitar case with his address label on it – I said I’d never use it and have been as good as my word.

Stereolab – I saw them a lot in various pubs in north London when I first started out but this image was taken at the Astoria in Charing Cross Road during a brief period when the band surprisingly (not to its fans of course) almost became mainstream and was briefly a big draw.  Sadly, of course, Mary Hansen was killed in 2002 when she was knocked off her bike by a truck…

Ash – honestly can’t remember where these were taken but the lighting and smoke produced some interesting effects.

The Stairs – taken at the (then) new Marquee in Charing Cross Road.  I seem to remember they were supporting Bang Bang Machine and you could not imagine two more dissimilar bands.  There was no-one else like the Stairs at that time (1992, maybe).  I loved Mexican RnB and saw them again at Glastonbury later that summer.  I’m still in touch with Edgar off and on – they were supposed to be using some of my shots in a documentary but the last I heard of this was about three years ago and perhaps one shouldn’t expect anything other than chaos from this particular band…

Technical notes – I started out with a Canon EOS1000 autofocus camera but after that I  mainly used Canon A1, AE1 and T90 35mm manual focus cameras and tried to avoid using flash whenever possible.  At the bigger gigs you were limited to the first three songs and the normal practice was to load three cameras with three different lenses (usually 35mm, 50mm and 85mm; at pub gigs the 19mm and 28mm lenses would come in handy; zoom lenses were not cool!) with the result that you would end up with about 108 shots.  Melody Maker usually wanted at least six usable 10″x8″ prints to choose from and it wasn’t always easy to achieve this.  Hence my jealousy of modern photographers who might be able to shoot hundreds  of shots in the same time…  Favourite film was Kodak TMax 3200 which I would often push to 6400 using TMax or some other developer whose name escapes me.  Fuji 1600 was also very good and with the benefit of hindsight I wish I’d used more of it.  I sometimes had to work through the night to produce black and white prints and if you tell that to the kids today, they don’t believe you!!

For colour work transparencies were always required and I would get these processed at Joe’s Basement in Wardour Street, Soho.  When I did the Breeders gig in Glasgow I went straight from the otel bar (about 4am) to the airport, then to the processing lab in order to get the slides to the Melody Maker the same day.  Rock and roll, I thought to myself before sleeping the rest of the day.

When I first started working for Melody Maker the paper would reimburse film costs as well as travelling expenses.  It stopped paying for film soon after I started which made it even harder to make a profit.  For overnight trips everything would be taken care of by the band’s PR people, top class hotels were usually used and you would be driven around.  You felt pretty important being looked after like this but it was a rare experience for me…

Fees were paid according to the size of image used in the paper, ranging from about £40 for a small image to around £150 for a three quarter page one.  I never had a Melody Maker cover so I have no idea what would have been paid for that!  One positive aspect was that we photographers always retained copyright so we were free to market the images elsewhere too.  Of course magazines were not usually interested in images that had already been used in other publications and Melody Maker always had first pick.

Sadly my entire collection of 35mm cameras and lenses was stolen in a burglary in 2007.

With the death of Melody Maker and other music weeklies did this affect your work?

By the time MM closed in 2000 I had pretty much drifted away from photography anyway – I was never a full-time professional and I decided that the Civil Service was a much easier way of making a living and getting a decent pension; also I was worried about my hearing and my liver, despite using earplugs and radically cutting my alcohol consumption back!

Do you still take pictures?

No – snobbishly, perhaps, I think that now everyone’s a photographer I no longer need to – and I slightly resent the fact that whereas I had to spend hours up to my elbows in water and chemicals producing black and white prints it’s now just a matter of holding up an iPhone or a camera with a huge SD card and shooting as many frames as you like. Grrr … I’m over it now though!

Will you ever do a book with your pictures?

What are you up to these days?

Finally, whats on your turntable at present?