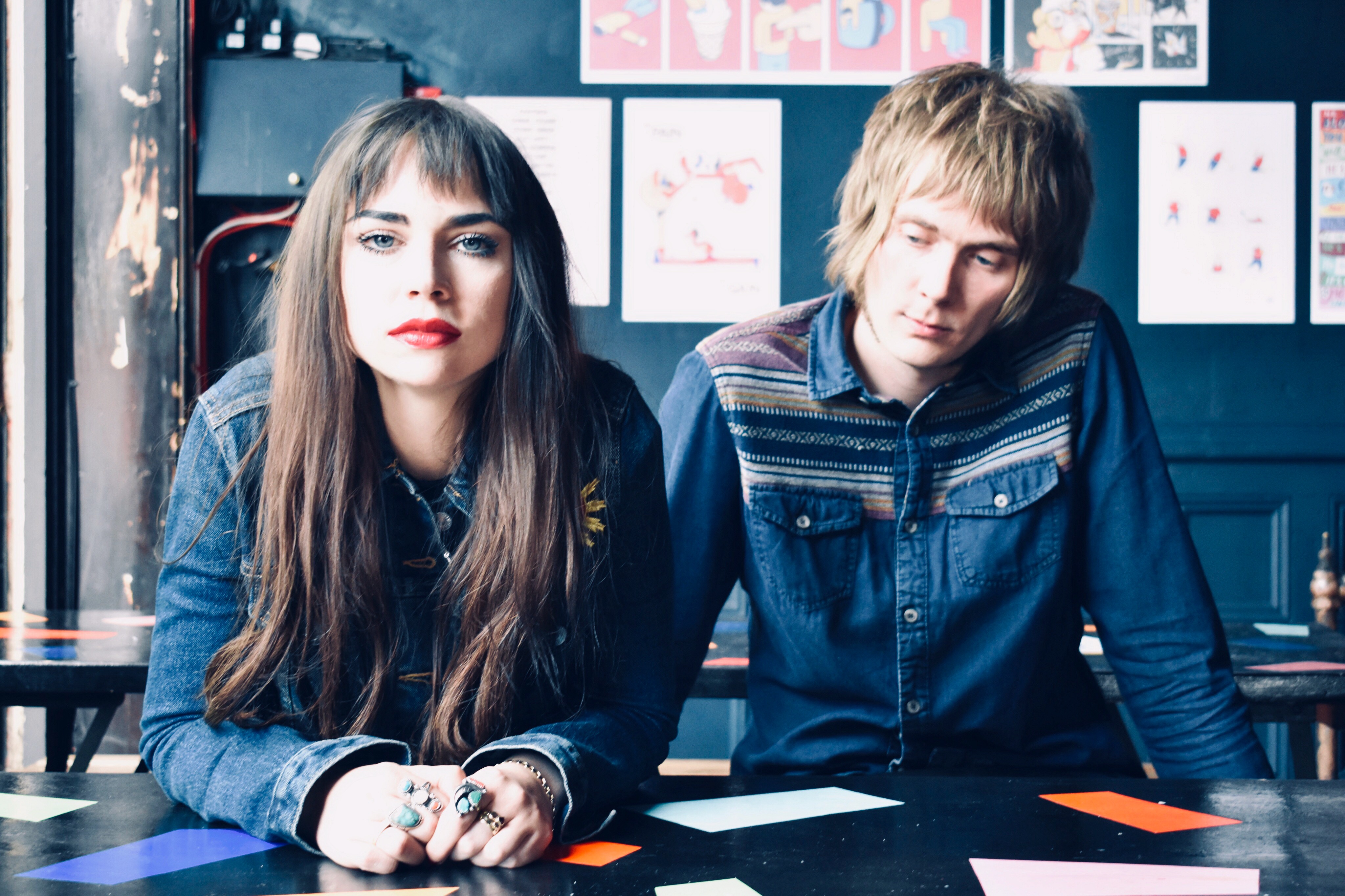 This years crop of new & emerging artists is possibly one of the most exciting the Weekender has hosted to date. Amongst them is London duo Black Doldrums, described as creating “transient and euphoric dark-psyche shoegaze”

With a brand new EP imminent we spoke to the duo Sophie and Kev ahead of their Weekender gig.

Lets start with the bands history – how the Black Doldrums come about?

KG – I had been in and out of bands for a while but with little or no success due to other commitments and band mates coming and going. But throughout the whole thing I was always writing and I was kind of left with loads of tunes doing nothing. Me and Sophie had met through music at a 60’s psych night and got to know each other over a few years exchanging musical tastes, going to gigs and hanging out at home playing records into the early hours. It wasn’t until we went to an all dayer at The Shacklewell Arms where a bloke came up to us and said “are you two in a band?” And we said no to which he replied and said “you look like you are, you should be”. Laughing it off at first, we got talking about it and the idea stuck. We intended on getting more members but we enjoyed seeing what we could do just ourselves and just continued the two of us.

SL – I think we both started off having completely different tastes in music so when we got together and put music to the songs Kev had, we came up with some interesting material that developed into what we are today. I wanted to be in a band for years but just didn’t feel drawn to anything, I feel now like I’ve found my purpose. I’m really thankful to the bloke in the pub telling us to start a band that fateful summer in Dalston.

Your music is described as shoegaze and new psyche, the term shoegaze for me (someone older) evokes thoughts of early Ride – Slowdive – Chapterhouse, who is Black Doldrums influences and inspiration behind your sound?

KG – Pretty much the same actually. My main inspiration for picking up the guitar in the first place was listening to my parents record collection around the house. So it was The Beatles, Stones, T-Rex, Motown, and then when I was old enough I caught the back end of the Oasis hype. Oasis were always outspoken about what bands they liked so being a fan I would go and check out whoever they liked so I was then digging into Weller and The Jam, Bowie, Sex Pistols and The Stone Roses. As soon as Andy Bell joined Oasis I discovered Ride and it all opened up from there really. BRMC supporting Oasis too was a big moment for me too.

SL – Our influences have really crossed over now, definitely for me there’s Oasis, The Stone Roses and BRMC, but also My Bloody Valentine, Nirvana, Sisters of Mercy, Joy Division, the Velvet Underground and Jesus and Mary Chain.

The Psyche scene looking on and listening appears to be a really exciting guitar music movement that is gathering pace, a few key venues and promoters in London & Manchester doing great stuff and pushing it on?

KG – Yeah I’d say it’s always been there but in recent years it has picked up a fair bit. With The Black Angels doing so well and kind of almost becoming a household name, certainly compared to most Psych bands in that scene. It could be a sign of the times that people are looking for something more in music. Psychedelia to me isn’t just a load of reverb and nonsense lyrics, it has a sense of depth I think people need. Venues in London are closing down at an alarming rate but out of that shit storm you get other venues and promoters cropping up in unusual places and it actually gives real fans and passionate people the chance to play or put on shows themselves. We often play at The Shacklewell Arms or The Victoria in Dalston. It’s cool to have regular spots and a close tight knit community.

SL – There’s a lot of promoters at the moment really dedicated to putting on great bands, not just Psych but also bands that kind of fit around that genre. The guys that put the nights on really do it for the love of it and most want the best for the bands. Over the past couple of years we’ve really seen the scene flourish and build, it’s really nice to see.

A very exciting time for Black Doldrums, a brand new EP about to be released, I believe you have worked with the esteemed Pat Collier during the process of recording it. Can you tell us about it and the tracks?

KG – In a way there’s not a lot to say! It was dead easy. Pretty much all one take. Which I think in a way speaks volumes for the way Pat works. Very professional and organised. When you’re behind that glass in the studio and you’re riffing away, laying down the 7th guitar on a track that already has 3 guitar parts in it and whoever is behind the desk doesn’t say much you’re not too sure how to take it but with Pat he was proper straight up and would offer advice where needed. And that’s really all we need as a band. Some freedom to do what we want to do but someone with all those years of experience to guide the ship. I was just concentrating on not thinking about all the classic tunes he’s been involved with. Would of put me off otherwise.

SL – The funny thing with Pat was that in the past we’ve set up and been asked to play through a song. When we recorded our first song with Pat (Mae’s Desire), his voice came through the headphones saying ‘shall we give it a go then?’ so me and Kev started playing. When we finished, he gestured for us to come and have a listen. I didn’t actually know he was recording it and because we were relaxed and not thinking “shit we’re recording don’t go wrong” we played it all the way through first time. That’s actually the take you’ll hear on the final EP.

This year is possibly the most exciting collection of new and emerging artists that have played at Shiiine, are you looking forward to it and who are you hoping to check out?

KG – Yeah us too! Feel really privileged to play with some childhood inspirations. Looking forward to seeing Lightning Seeds, Idlewild, The Wonder Stuff, Swervedriver and of course Edgar Jones as I absolutely loved The Stairs! People just don’t write songs like these lot anymore! Looking forward to seeing everyone really and hanging out with people that think like us. Looking forward to seeing Bez too! Last time I see him he was playing in that super group years ago, the crowd was invited up on stage towards the end of the set. Jumped up with a mate, saw Peter Hook there but he looked pretty busy, gave Bez a pretty sweaty hug, kind of just slid off him in the opposite direction, little trip over his mic cable and exited stage left! What a Pro.

SL – Same for me really, looking forward to seeing Swervedriver as I missed them last year in London. I like to have a listen to as many bands as possible before the event so that I’m semi-familiar with the sound and material before seeing them. I’ve been listening to the Shiiine On playlist on Spotify so will dig in a bit further with that too. There’s a handful of bands I’ve seen before and played with who I’m of course looking forward to seeing again and hanging out with. I’m also really excited for the club nights afterwards, the tunes are gonna be banging!

If you could pick one Black Doldrums tune that would be the perfect introduction for someone who is new to your music , which would it be?

KG – I would say our track “She Divine” or “It’s a Dandy Massacre” both kind of dark and moody but you can move to it.

SL – Completely agree with “She Divine” or “There Is No Eye” – it’s got all the elements of our music, psychey, shoegazey, a bit dark and moody but absolutely having it!