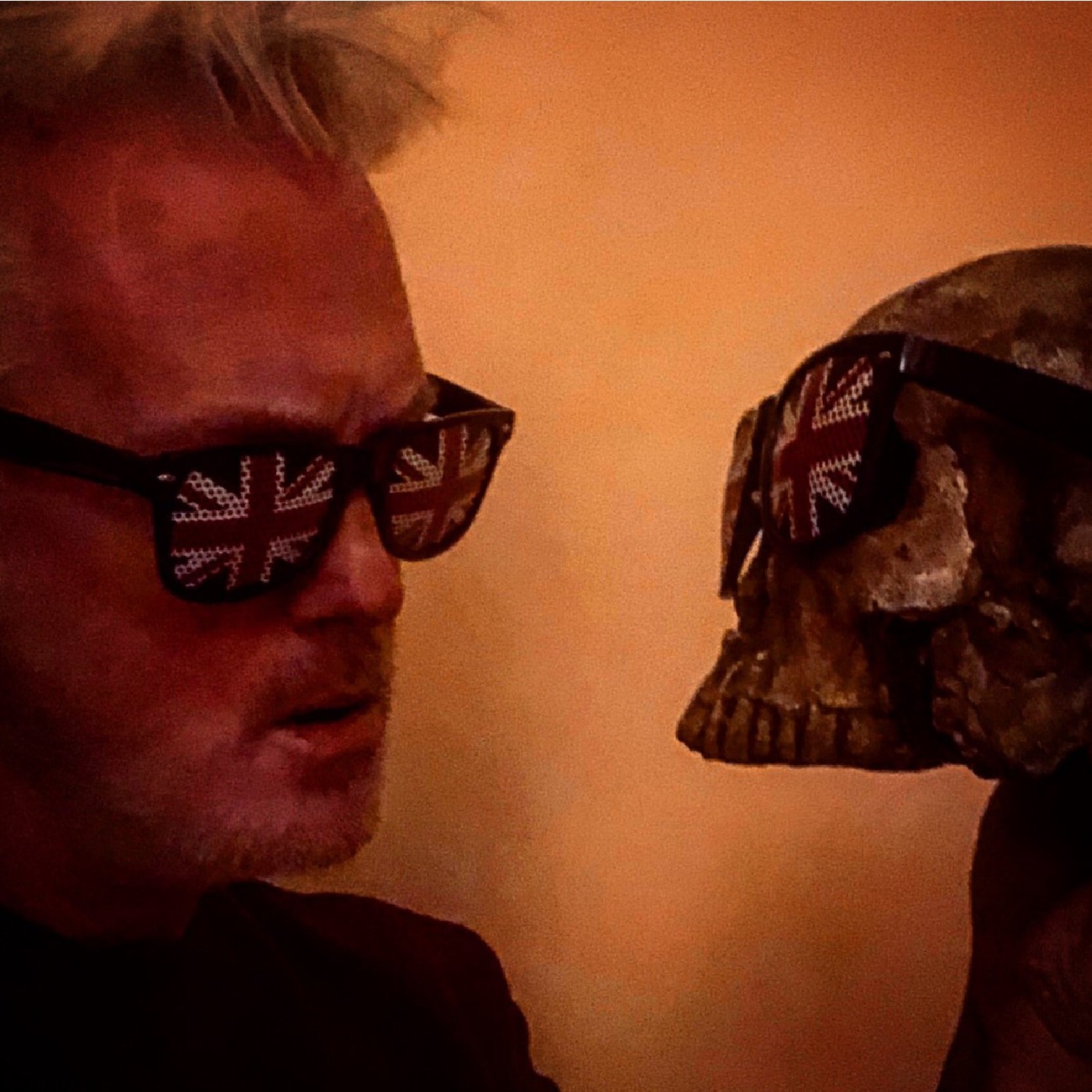 The million-selling songwriter and cult hero Stephen Jones spent the first half of this decade reconnecting with his DIY roots, exploring new styles and approaches with various other projects, producing some intriguing albums, all self-recorded and self-released. Independence has allowed him to dig deeper creatively, taking more risks without having to worry about commercial expectations. These projects have breathed new life into Babybird, which was reborn once again in 2015 as a completely self-sufficient musical enterprise. ‘Happy Stupid Nothing’ collects together some of the best Babybird recordings from the last few years, and stands as a magnificent journey of an album in its own right. Putting infectious melodies next to black humour, atmospheric soundscapes, tender emotions and unexpected changes in direction, the 19 songs showcase the many different sides to this extraordinary musician and his group.

Along with the gold discs, millions of sales, a string of Top 40 hits, Brit Award nominations, critical acclaim, and a dedicated cult following, Babybird has also survived the curse and repercussions of a smash hit single, cringe-inducing endorsements from members of the royal family, issues with record labels, huge changes in the music industry, and even a heart attack. But Jones remains dedicated to his cause, and has recently been making some of the best music of his career, over 20 years after his commercial peak. Meanwhile, people are still listening to albums such as ‘Ugly Beautiful’ and the fan favourite ‘There’s Something Going On’ decades later. Long-considered to be one of the most gifted and underrated songwriters in British music, his remarkable talents are underlined by this new collection of songs.

The Babybird story begins in the late 1980s when Stephen Jones begins writing music for a Nottingham-based experimental theatre company. By 1994, he had written over 400 songs and landed himself a publishing deal, but was unable to get a recording contract. With great faith in his work, he used his own money to finance the release of some “lo-fi” albums under the name Baby Bird. Featuring his homemade demo tracks, the releases were met with critical acclaim and found their way into the UK indie charts. With guitar groups booming in the mid 90s, Jones got in on the action by forming his own band. So Baby Bird became Babybird, and built themselves a following, soon scoring a record deal.

The first “proper” Babybird LP ‘Ugly Beautiful’ contained full-band versions of songs Jones had previously recorded as demos on the self-released albums. It went Gold and spawned four Top 40 hits, one of them being the omnipresent mega-smash ‘You’re Gorgeous’, which went to number 3, staying in the charts for 19 weeks. The casual pop consumers were probably taken aback when they heard the rest of ‘Ugly Beautiful’, where the big hit was placed alongside frightening songs about death and religion, dark lo-fi moments, as well as some more melodic tracks. There was also the cacophonous, insane ‘King Bing’, Jones’s nine minute “no thanks” to the music industry and pop stardom. Those who were paying attention soon learned that there was a lot more to Babybird. A few years later in 1998, they re-emerged with the darker ‘There’s Something Going On’, an extraordinary record that delivered another three UK chart entries, including the startling ‘Bad Old Man’, ‘If You’ll Be Mine’ and the wonderful ‘Back Together’. The album was received well by critics and entered the UK Top 40. The follow-up ‘Bugged’ featured another Top 40 single, ‘The F Word’, which went on to be used as the theme tune to Gordon Ramsey’s TV series of the same name. Babybird split in 2000 after departing from their record label, with Stephen Jones turning to making sinister hip hop with Death Of The Neighbourhood, and crafting his own solo record ‘Almost Cured Of Sadness’ in 2003. However, a few years later in 2006, Babybird returned with the 2006 album ‘Between My Ears There’s Nothing But Music’.

Not every band has Hollywood superstars desperate to play with them, but movie legend Johnny Depp got his wish granted when he contributed guitar to ‘Unloveable’, a single taken from the 2010 album ‘Ex Maniac’. Depp also directed the music video for the song, and appeared again on the 2011 LP ‘The Pleasures Of Self Destruction’. Babybird was put to rest again shortly afterwards, with Jones keen to rediscover the essence of his early work with new projects. Recorded at home, the largely instrumental albums he released as Black Reindeer saw a departure into more spacious, atmospheric mood pieces. He also spent some time providing soundtracks to various films and TV shows, as well as self-releasing a massive amount of work under different aliases via his Bandcamp page. With no label, Jones now had complete creative freedom, and was able to explore ideas deeper. He released some weird dance music as Trucker, as well as more of those cinematic Black Reindeer albums, and some efforts under his own name, including the mesmerising 2014 album ‘Ambition Expired’.

Babybird was revived in 2015, initially to release some old unearthed demos and a “final” album. But then came more material, occasionally absorbing aspects of his other projects like Trucker, Black Reindeer, Arthritis Kid, and Deluder, but combining it with a rediscovered Babybird essence. Albums arrived in quick succession: there was ‘Back To The Womb’, 2016’s ‘Life After Death’ and ‘A Bad Joke’. ‘The Wrong Words’, ‘I Miss Myself’ parts 1 and 2, and double album ‘People Do Stupid Things’, were all released in 2017. Then came the news that Stephen Jones had suffered a heart attack. With his health in mind, fans expected him to at least slow down with his seemingly non-stop recording sessions. Instead, Jones was already planning his next project, and soon resumed work on ‘The King Of Nothing’, which was released as three albums. While still bringing out stuff under other pseudonyms, 2018 delivered more LPs: ‘Selfies Inside The Coffin’, ‘You And Me Is Wrong’, and the strange Halloween concept record ‘Pretending To Be Dead’. This year has already produced double albums ‘Happyface/Sadface’ and ‘Black Ghost’.

Compiled and curated by indie label Psycho Mafia Recordings, ‘Happy Stupid Nothing’ is a collection of songs on a par with the very best Babybird records, and represents a new creative peak for this unique, restless and distinctive musician. Many of these songs slipped under the radar or became lost in the vast archive of music that Jones has published online. Here, they are proudly and deservedly on display.

The epic, sweeping ‘Feel’ is a powerful tone-setter that would make a fine Bond theme, and the lairy ‘King Of Nothing’ walks with a sleazy swagger and plenty of “fuck you” cool. Pretty, elegant patterns fall nicely into place on the elegant ‘Fly’, while the magnificent ‘In Place Of Love’ is a haunting, understated beauty offering the most enticing hooks. Another genuine Babybird classic, it’s cold yet comforting. Odd robotic hip hop segue ‘Bonebox’ sets up the romping groove of ‘The Greatest Thing’; a lively, playful track with a twisted, ominous undercurrent. We are struck by the electronic horror soundtrack ‘People Do Stupid Thing Part 3’, an unsettling and atmospheric revelation, demonstrating how Jones has become free to go wherever his musical imagination takes him. The cinematic moods also find their way into the disturbing centrepiece ‘I Am Not Here’, with Jones sounding like a helium voiced demon as he utters “I am not who you think I am”. Then come compounding hums of bass, big sweeping drums, and emotional chords as glowing vocals soar in the distance. Blending the atmospheric aspects that have grown through his work with the more melodic touches, it’s a fascinating piece.

‘Football’ arrives sounding like it was taken directly from a late 90s computer game, with busy synths and dance beats leading nicely into the loose, looping ‘Back To The Field’, a dose of effortless brilliance which floats upon a tasty little lo-fi rhythm. In direct contrast, the brilliantly produced ‘I Am Not Done’ serves up spine-tingling drama, earworm verses, and a sensational, defiant chorus. It’s complimented by searing techno instrumental ‘Little Hope’, before the arrival of ‘Vacuous’, a self-deprecating moment of joy that offers another irresistible singalong. As well as a gift for memorable hooks and a penchant for dark humour, Jones is known for being an expert in crafting heartbreaking piano ballads, and the glorious ‘Love Life’ is up there with the very best of them. Another surprise comes in the form of the crashing, cascading soundscapes of post-rock instrumental medley ‘Happiness Peaks And Dips/Robot Streaker/The Moments Before/Cataclysm’, taking the album down yet another fascinating path. Dramatic northern disco stunner ‘Love Is Not Enough’ is probably a number 1 hit in some parallel universe where justice always prevails, again masterfully arranged and produced by Jones. The triumphant ‘Bad Feeling’ doesn’t take long to capture the ears, and provides further proof that the Babybird magic is back in full effect. The collection is completed by the lost classic ‘The Weight Of My Sin’, an anthemic tearjerker recorded during the sessions for 2011’s ‘The Pleasures Of Self Destruction’.

Babybird plays the Shiiine On Weekender on Saturday 16th November 2019