Hyper-literate, cyber-alliterate pop-purveyors supreme, Bis’s Manda Rin and Sci-Fi Steven fuel those rumours of a sonic assault on the nE.U.ro-senses, talk Shiiine On, discuss the pros and cons of being wilfully ‘anti’, the temporal juxtaposition of positional opposition and staying ahead of the curve, notions of ‘alternative’ and how the time is now for the Bis sound to reign.

A bill with the Primitives and Altern8 is certainly something we’ve never done before!

Have you been to Butlin’s before?

Wonderwest World, Butlins in Ayr many times as a kid which I loved but never been to Minehead. I’m definitely more a Butlins gal and never tried the pricey Centre Parcs type places.

Who are you looking forward to seeing/hearing?

I’m not sure we’ll get to see many other bands as the drive from Glasgow that day is pretty long, and we’ll be heading to London the following morning. Primitives, Salad and Altern8 would have been good to see though! On the Friday our pals Collapsed lung play so will sadly miss them.

‘Kandy Pop’ in 1996, I, in vain, attempted to alert my work colleagues at the time to this ‘future’ of music, a deconstructed-reconstruction of the past>present>future to no avail. I hear(d) pop, punk, post-punk, New Pop and I feel vindicated now. Do you?

It’s brilliant how well ‘Kandy Pop’ is still received at gigs considering it’s over 20 years old. I’m flattered that it’s still appreciated and also that currently other bands make songs not too dissimilar (or maybe I’m just imagining it in my head after playing it a million times …) Some people ridiculed ‘Kandy Pop’ and Bis at the time so I’ve learnt not to get too bothered by anything and just be proud of what we’re doing – and most of all enjoy it!

Emerging to much trumpeted fanfare how exhilarating/terrifying was it?

It was bizarre, and we’re so lucky to have experienced something that many others would strive to. I think I was taken aback by it happening so quickly and wish I’d stopped to appreciate it more.

You were an anomaly to the ‘alternative’ mood of the time in that you didn’t hark back to a fantasy past of Britannia waving the rules, your DIY stripped down ethic conversely appeared futuristic and positive. Agree?

I don’t think we fitted into the “Britpop” angle as perhaps we were a little bit odd and not so straight forward compared to those bands. Also being from Scotland kept us true to our roots and constantly wanting to look ahead and incorporate more electro sounds which at the time was the future I suppose.

Do you think your time has finally come, the world’s woken up to the Biscotechque? Philoso-Pop, head music for music heads?

We can only hope.

Who and what were your inspirations in forming the band?

For myself Riot Grrrl bands like Bikini Kill, Bratmobile and new-wave sounds like the Slits and Lilliput.

First record you ever bought?

You were on the big undergrounders, cool cultural cached labels like Chemikal Underground, Wiiija, K, Grand Royal, what liberties did they enable you take?

We were always very opinionated about retaining control over our sound and image. The last thing I would want is a label changing who we were musically and making us dress like people who weren’t ourselves and would look gorgeous in a magazine. We were happy to be un-gorgeous.

1998’s ‘Eurodisco’ can be considered a forerunner to the Scandi-committee patchwork sounds that were once confined to Med beaches, but, are now enshrined in the outer reaches via mass media massaging. Discuss.

There is so much you could do with ‘Eurodisco’. Might still happen! Eurovision 2022…..

‘Indie’ does the term/aesthetic still have currency?

To a small degree.

You were feted then slated, the vagaries of being in a band I suppose. How did you take the plaudits with the brickbats? How did you roll with the punches and turn criticism into creation?

It’s hard to begin with as we weren’t prepared for it, especially at only 16, 17 and 18 years old. I was also quite shy and self-conscious so I had a lot of learning to do very quickly.

Steven Wells in the N.M.E. used your name as a pejorative, did you take it as a back-handed compliment, ‘all press is good press’?

He was a knob, but having an N.M.E. front cover is something we can only be proud of as there’s not many bands who get that privilege.

Of which, with the demise of the weekly printed music press do you think society has lost a force for good?

It’s sad it’s gone as I have a lot of good memories reading the N.M.E. and learning about new music. But, their website focuses more on things that aren’t music-based so that’s disappointing to see.

Your art clearly betrays/displays your influences, who else can we expect to see receive the Rin-spiration treament?

I haven’t done any art in a while sadly. I really enjoy it and need to get back into it as I need be teaching my son to draw when he goes to Primary School this year.

Are you comfortable with your legacy in the annuls of the pop-cultural museum? Is nostalgia what it used to be?

Our legacy is different to different people, but the fact that we still remain as important to a bunch of folk is highly complimentary. Great to be a memory in people’s lives.

Who or what are you listening to at the moment?

When’s the new LP out? What themes/topics/ideas can we expect to be Bistributed?

November hopefully! The icing’s still to be put on the cake but expect total Bis pop punk with rants, raves and rages.

Data Panik Etcetera: an overtly political album that as well as channelling and filtering the technonanism and disparity so rife in everyday life, is its title a hark to Pere Ubu’s own existential gloom and reflecting and refracting society’s state?

We briefly rebranded as Data Panik in the mid 2000’s and the songs on that album mostly date to that time, the name absolutely being stolen from Pere Ubu! There’s definitely a large quotient of societal commentary in there, and (as usual) a sarcastic self-analysis – both of the individuals and our group itself. Our sloganeering was still there, just with the 90’s enthusiasm being slowly eroded by world-weary cynicism. Good tunes though…

Is ‘Control the radical’ a statement on how dissent is framed and diluted by the internet’s illusory freedoms? With its line ‘we know what we want, but we don’t know how to get it’ a nod to the Sex Pistols, but an admission of technology’s stultifying array of choice that amounts to stasis? Keyboard warriors, for example.

Being from the mid 2000’s, it’s certainly a paranoid comment on modern freedoms. More pointedly, it’s another auto-critique – our traditional lyrical direction is to tell the listener what to do, this time we’re addressing ourselves. If we control the radical, reign ourselves in, perhaps we would gain acceptance and credibility – again, essentially a defeatist sarcasm but dressed in pop language! So yes, it’s about how dissent is framed and diluted but by how we limit ourselves.

‘Minimum Wage’ is like the B52s covering Crass. Would I be right in viewing it as a satire on the manipulations of reality TV and their fallow brick roads?

That I would like to hear! Yeah, I reckon it’s a comment on music-based reality TV of that era with a chorus that simply couldn’t be digested by that audience. A review of the time suggested it was disingenuous of us to say we’d ever personally been on the minimum wage. We all have been before our “career” and afterwards!

‘Cubis (I love you)’ is it a commentary on the game – how it’s a prototype of the mind-numbing narcoleptic games that followed (i.e. Candy Crush) – or a metaphor for the vagaries of e-romancing alone, online mating-hating, chasing the borgasm?

Wow, I’ll need to give that one another listen! It’ll be a comment on something, that’s for sure, but the point we were trying to make currently escapes me!

You released your tribute to Factory in 2002, four covers (FACT2002 E.P. covering Joy Division/New Order/Section 25/A Certain Ratio) that updated post-punk sounds that were bleak and new when created, your electropian versions sound as bleak and contemporary today. An indictment/statement on the lack of a forward thrust in culture?

It is quite bleak isn’t it? I don’t think it was a cultural comment as such, it was really just created because of the Glasgow club scene of that time. Every Sunday, we’d go to Optimo at The Sub Club or wherever else it was on and one Monday I awoke to find I’d recorded a vocoder-driven ‘Love Will Tear Us Apart’. The rest followed, personally I love the mistake-laden indie-synth records of the very early 80s so New Order’s ‘Hurt’ was obvious for us. We were also very into the European electro scene of the times, so ‘Shack Up’ is a cover of a cover that sounded like something released on BPitch Control. The sounds we used were not designed to be retro, but the material is. I’ll dig it out…

Your choice of songs also pre-empted the subsequent ‘renovation-veneration’ acts that were to follow (Bloc Party etc). Were you aware you were tapping into this (what Simon Reynolds would term ‘retromania’?

There’s two threads here – one is that we were not scared of the big bad 80s when it was fashionable to be so. When the guitar bands were in awe of Big Star or The Jesus And Mary Chain, we were digging Human League and Kim Wilde. This was partly a wilful “anti” move, but also a genuine love of pop music sounds and constructions of 1978-1982. The other thread is that because in the mid 90s the 80’s had become the decade non-grata, we could pick up synths and drum machines for pennies when everyone traded them back in for guitars. Accidentally, we created something jarring in the context of the times – we certainly had quite retro influences at heart but not the same ones that were prevalent then. 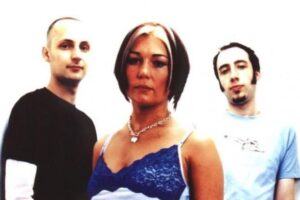