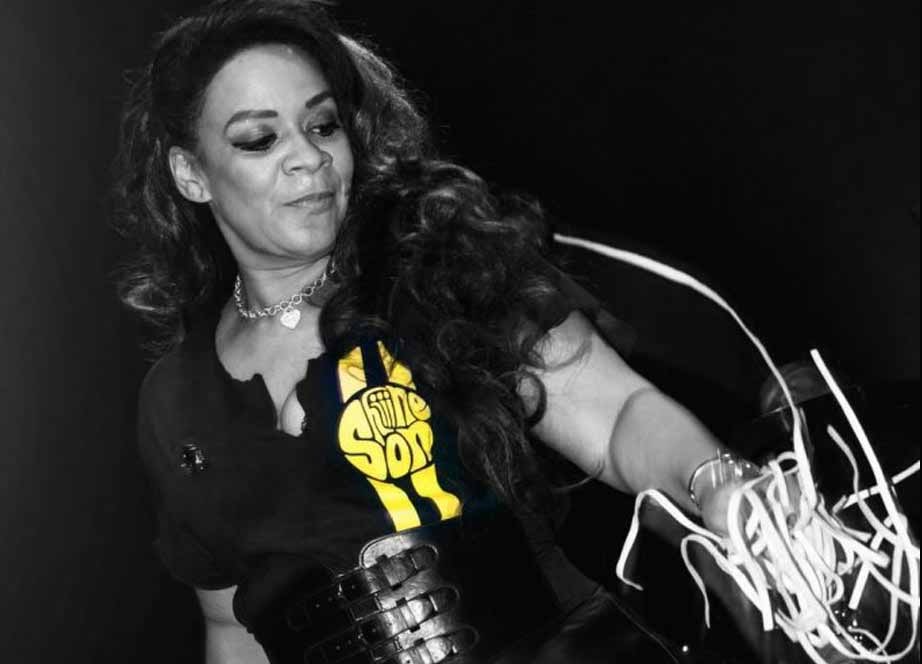 Ahead of the inaugural 080918 all dayer at the Genting Arena, we had a very interesting chat about all things Shiiine and a dynamite collaboration in the offering from self-confessed Shiiine On fan and absolute star of previous festival’s – The Happy Mondays legend and Mancunian icon Rowetta…

Hi Rowetta, how the devil are you?

I’m really good thank you. Just having a lovely break in Ibiza. Just doing a few interviews but actually managing to switch off and relax.

I’ll be back in June to sing at Ibiza Fashion Festival.

Sounds great. You’ve performed two of the last three Weekenders, what is it you like about the Shiiine brand?

Well it reminds me of one of my all-time favourite gigs, Happy Mondays at Elland Rd and a lot of our pals play. The crowd is always right up for it. I just love this festival.

Last year you were the star of the Monday’s show at the Weekender – it was pure punk rock from where I was watching. How was it for you? (I remember Bez picking up the bass at one point!)

I loved it. Not everyone gets us but we are all punks and real!

Can you envisage the band going back in the studio at any point in the future to record a new album, and if so who would be you’re ideal choice to produce it.

I really do hope so. It is definitely being discussed. My ideal producer would be Nile Rodgers (genius)

You must have been very proud and emotional to have sung “You got the love” tribute to the Manchester bomb victims on the Andrew Marr show, How did this come about?

They just asked and I was so honoured. It was difficult to get through and I cried my eyes out straight after, but what an amazing honour.

I got a standing ovation on the train back later in the day. That was very special.

From the outside and the age of social media it seems as if you are the most prominent keeper of the Mondays flame and the glue that holds it all together on and off the stage, is it a fair assessment?

Yes, because I was a fan first so I do care about giving the fans something special and interacting with them.

Tony Wilson was obviously a very important person in your life and someone you speak of warmly, is there an anecdote or story you could share of the great man we may not have heard?

I just adored the man and I was so lucky to have been a friend. I did think it weird and funny too that he chose ‘Bob’s yer uncle’ as the song to be played as his coffin left the chapel. I was really surprised and double proud.

What is your favourite thing you have done musically outside of the Mondays, (my own personal favourite is Dynasty of Two -Stop this thing  as it always reminds me of the Hacienda.

Yes, that was Graeme Park & Mike Pickering. I love the work I’m doing with Gaz Cobain Amorphous Androgynous, especially the track I’ve done with Paul Weller and Noel Gallagher on drums and bass. Probably the best track I’ve ever been involved. Hopefully it will get a release this year – they’ve just finished mixing it.

The Mondays last played the NEC in November 1990 on the pills n Thrills tour, good to be back?

The gigs just keep getting better. Very proud of what we’re doing now, everyone at their peak.

Singing ‘Atmosphere’ with Hooky is one of the most enduring highlights of all the Shiiine events. Any chance it could happen again on a Shiiine stage if the opportunity arose, is so what would your choice of song be apart from ‘Atmosphere’, my own choice would be to hear you singing on ‘Crystal’ and ‘Run Wild’ on the ‘Get Ready’ album if Hooky gets round touring it.

You would have to ask Hooky. I love singing with The Light. Amazing band, great people and Ian Curtis’s lyrics and melodies are just stunning.

We have an official Hacienda after show this year with Todd Terry, Marshall Jeferson & Jon Dasilva. What’s your favourite Hacienda ‘classic’ track?

I love singing ‘You Got The Love’

You can sing one last Mondays tune for one last time with the band what would it be?

Probably ‘Kinky Afro’ it never ages and I love singing it. Lyrics are absolute class too.

If you had to choose, what are your top 3 Manchester bands of all time?

Apart from us, The Stone Roses, Oasis & Blossoms

Any message for the Mondays fans coming to the NEC for the show?

Just know that you will have an amazing time!

Happy Mondays play the Main Stage at the Shiiine On one day festival at Birmingham Genting Arena, 8th September 2018. Get your tickets HERE