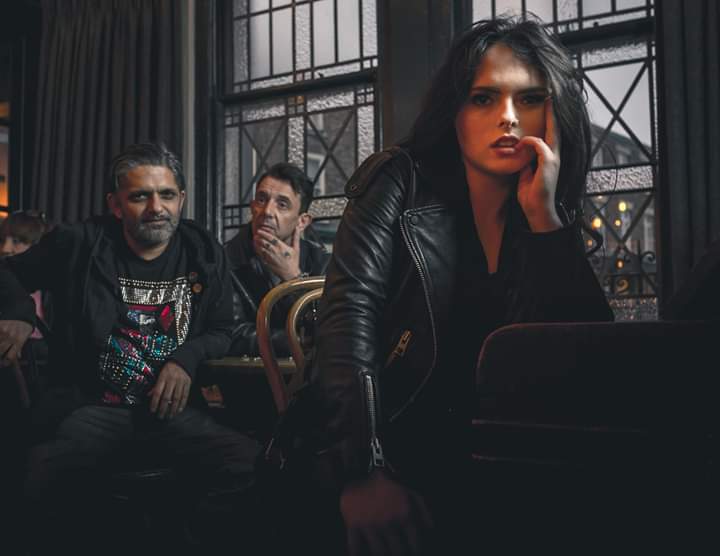 The San Pedro collective play their first ever full live performance at this years Shiiine On Weekender. The concept & idea of the collective is the brainchild of Rikki Turner-former member of the iconic Paris Angel’s and more recently the New Southern Electric and The Hurt. We had a few words with Rikki who gave us the story of the band…

Can I begin by asking about the background & idea behind the collective and how it all came together?

I had been working on an idea for around 3 months , i contacted a good friend (Suddi Raval) and asked if he wanted to work on them with me! I had previously met Millie Macbean whilst on my honeymoon in Lindos (Rhodes),she was singing in a restaurant and playing guitar. I cheekily asked her mum and dad if I could record her voice. The three of us went from there. I wanted to have a more of a say in production and writing than singing. We slowly built up everything from then on in.

From the outside the concept feels a really exciting and fresh approach to music, a real melting pot of genres – established musicians – fresh emerging talent – spoken word, with yourself (Rikki) at the helm as a conductor of the musical vision instead of a band leader as such.

You know, I have always had the view to try and make something different sounding on what ever I have worked or released. San Pedro had to be completely different, using different artist, musicians and genres, bringing people together from different backgrounds and from across the world to work together. Within the band they call me the conductor, a term I much prefer than bandleader!

Can I ask about the bands sound and electronic direction, through social I know how expansive your music taste and knowledge is. Did you set out for a electronic sound and feel or is that something that happened organically and experimentally from the musicians assembled for the first recordings?

I have always had a broad taste in music, though growing up in the late 70s and early 80s there was a lot of electronic music Kraftwerk, Can, John Foxx, Gary Numan, a love of Bowies Low and Station to being a part of Paris Angels.. working with Suddi we were always going use 303 Moggs Rowlands, we want people to dance and has ‘Pete Fonda’ once said and ‘ Have a good time’

I believe Shiiine On will be the SPC first ever full gig? What can we expect and can you introduce us to what the band line up will be?

Yes, Shiiine On will be a first – a debut gig as a full outfit!! We will be playing a 30 minute set with part of the EP and new single in there, plus a few surprises. On drums Simon Wolstencroft (The Fall, Ian Brown) Bass Keith Higgins, Guitar Justin Lennard, Key/Bleeps Martin McLaren, Vox Millie MacBean, Vox Sarah Bouchier (Nature of Wires ), Karl Hildbrant (Poet) and myself.

What is the future plans & what can we look forward too from the SPC beyond Shiiine On?

At the moment we have been working on rehearsals, plus our next single. We will be playing more gigs after Shiiine On and will confirm late November. S.P.C. revolves with people coming and going, working with other people, doing there thing. We are constantly writing and mixing ideas up. We hope to release the new Single with remixes after Shiiine On. Just like to say thank you to you all at Shiiine On for giving San Pedro Collective the opportunity to play.

See you all at Minehead 15th Nov!