Shiiine On Weekender 2021 - Line Up Announced - Shiiine On 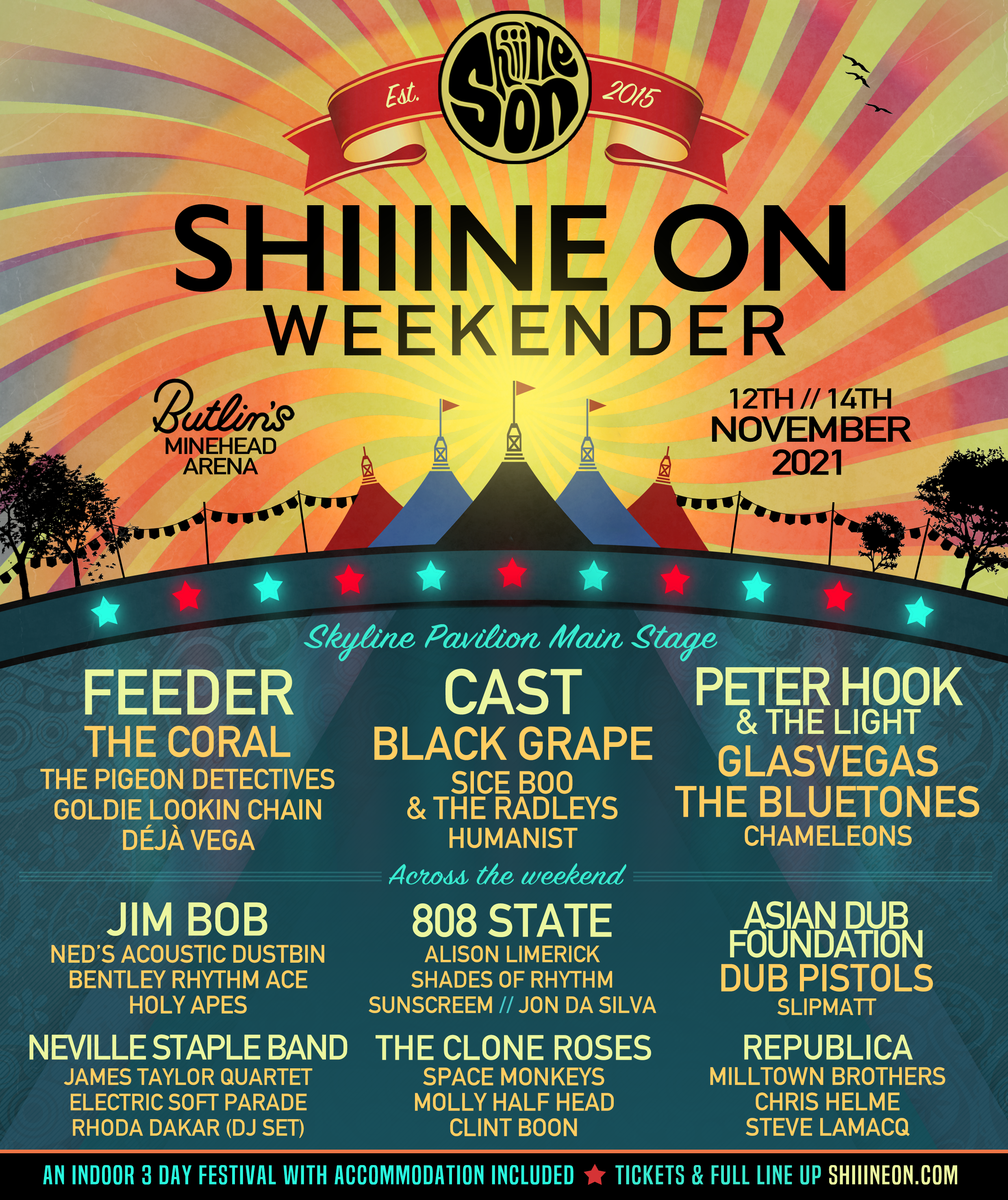 Taking over Butlin’s Minehead Arena for a long-weekend escape of music and mayhem, we will be hosting a trio of legendary headline acts of the highest order…

Getting the festival underway in style, Friday night headliners FEEDER will see dynamic duo Grant Nicholas & Taka Hirose blasting through over 20 years of hits, from ‘Buck Rogers’ to ‘Just A Day’ and airing cuts from their revitalised comeback LP of 2019: ‘Tallulah’. Marking the 25th anniversary of their seminal ‘All Change’ album, Saturday night will see CAST top the bill with their electrifying live show PLUS, closing-out the Shiiine On Weekender with a Sunday showdown of pure substance: PETER HOOK & THE LIGHT will bring a set brimful of Joy Division and New Order’s very finest moments.

Giving plenty of reasons to get down the front early, there will be superior supporting sets across the weekend from some long-established festival heroes. Merseyside psych-pop sorcerers THE CORAL (Friday), Shaun Ryder’s rabble-rousers BLACK GRAPE, plus a long overdue return from Scottish shoegazers GLASVEGAS (Sunday), will throw down the gauntlet to the headliners each night.

There’ll be sets by Brit-Pop powerhouses like THE BLUETONES who will be arriving for an all-guns blazing greatest hits slot; PLUS, a Shiiine On 2020 festival exclusive set from SICE BOO & THE RADLEYS, which will see Sice reunited with the Boo Radleys rhythm section Tim Brown and Rob Cieka to ‘Wake Up, Boo!’ and their many dormant classics at long last. There will also be sets from The Seahorses’ CHRIS HELME, JAMES ATKIN (of EMF), REPUBLICA, BENTLEY RHYTHM ACE, MOLLY HALF HEAD, THE CLONE ROSES, and THE SPACE MONKEYS.

Elsewhere, 21st Century alternative torchbearers like HUMANIST, THE PIGEON DETECTIVES and GOLDIE LOOKIN’ CHAIN will be showcasing their own tried-and-tested modern festival anthems.

Showing the kids how its done, vintage indie veterans including: CHAMELEONS, NED’S ACOUSTIC DUSTBIN, JIM BOB (of Carter The Unstoppable Sex Machine), THE MILLTOWN BROTHERS, and the JAMES TAYLOR QUARTET will be bringing timeless tunes and experience to the fest.

It’s not all just about the bands either. We will also be throwing one big holiday park house-party to rival the best, crammed end-to-end with even more entertainment inducing: CLUB NIGHTS, POOL PARTIES, LIVE COMEDY, CINEMA SCREENINGS, a SOCIAL RECLUSE EXHIBITION and much, much more.

All packages include 3 nights accommodation on-site at the Butlin’s Minehead Holiday Resort. (A deposit scheme is also available for customers who wish to pay by instalments.)

TRACK OF THE WEEK: EMF ‘Crime Of Passion’