Shiiine On Introducing: Narcissus - Shiiine On 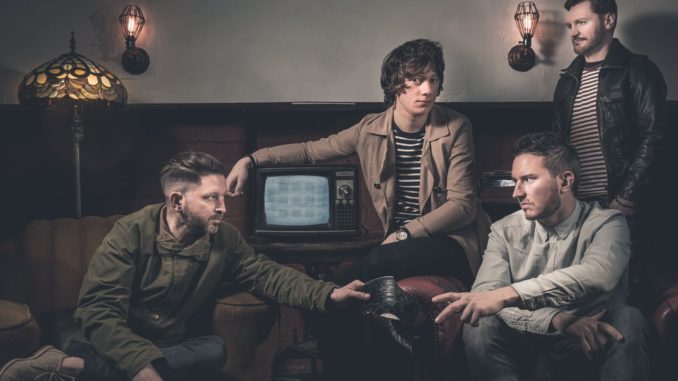 “New Order meets Primal Scream via DJ Shadow”. That is how Narcissus describe their unique & exciting melting pot of influences and sound. Hailing from Manchester – Narcissus are a band we have had the pleasure of watching a few times over the last few months. With new single “Burning Candles” just released these are a essential watch at this year’s Weekender .

We spoke to Ben from the band to hear what he had to say ….

Can you give us a brief history / origin of how the band formed & got together?

Ours is a strange back story of it not quite working out first time round and us mothballing things for a while before circumstances led to us reconvening and it making much more sense this time round. Chris and I formed narcissus when I answered a kind of lonely muso’s ad that he had placed but that I could’ve easily written. It was exactly what I was looking for and we complimented each other from day one. We swelled to a 4-piece and released a single on an indie, signed a publishing deal and set about recording our album before the wheels came off with the publishers and we were left with a shelved album and were creatively spent……until kismet struck years later and we picked up the baton again to see where it takes us.

There is a real exciting brew of sounds and styles going on the music I have heard to date , slight hints & a very subtle doff of the cap to what I imagine are your influences – tell us about the Narcissus sound?

We’re often described as having a unique sound that hops genre so whilst we do respect those that have gone before us in Manchester, our influences are wider than perhaps the guitars of our city’s musical heritage. Where all ends meet within the band are with artists like New Order, Radiohead, DJ Shadow, LCD et al.

I noted a few of your fellow Mancunian musicians have taken a interest and are fans of what they are hearing , Denise Johnson & A Certain Ratios Donald Johnson to name two?

Their support has been amazing & humbling. Both Denise and Donald have been so generous & it bends our minds to think our musical heroes are saying such kind things about us. Donald has even surprised us on a couple of occasions by turning up to our rehearsal room for a chinwag and check in. His words of support & advice are invaluable to us, he has really taken us under his wing and we savour every moment we spend in his company.

Where are the band up to regarding a debut album-is there one in the pipeline?

The album is long since done and is something we are really proud of. We expect it to surface later this year in follow up to us releasing a couple of singles all being well.

Will it be a self produced record?

It is self produced and we make no bones that we can be very particular about our sound and the way we work. We are always open to working with others and have done for our new single but the album is just us pulling together a myriad of musical ideas and influences into a cohesive body of work. It’s an eclectic piece taking in guitars, beats, trip-hop, electronica and anthemic choruses so offers a little something for everyone – jack of all, master of none!!

What is the immediate plans for Narcissus & the rest of 2019, can we expect more gigs?

Hopefully a busy one for us with releases and gigs. Our debut single should be out in April with another to follow in the summer before the album lands late 2019. We’ve got gigs lined up for the next few months including a couple of festivals so stay across our social media feeds for details.