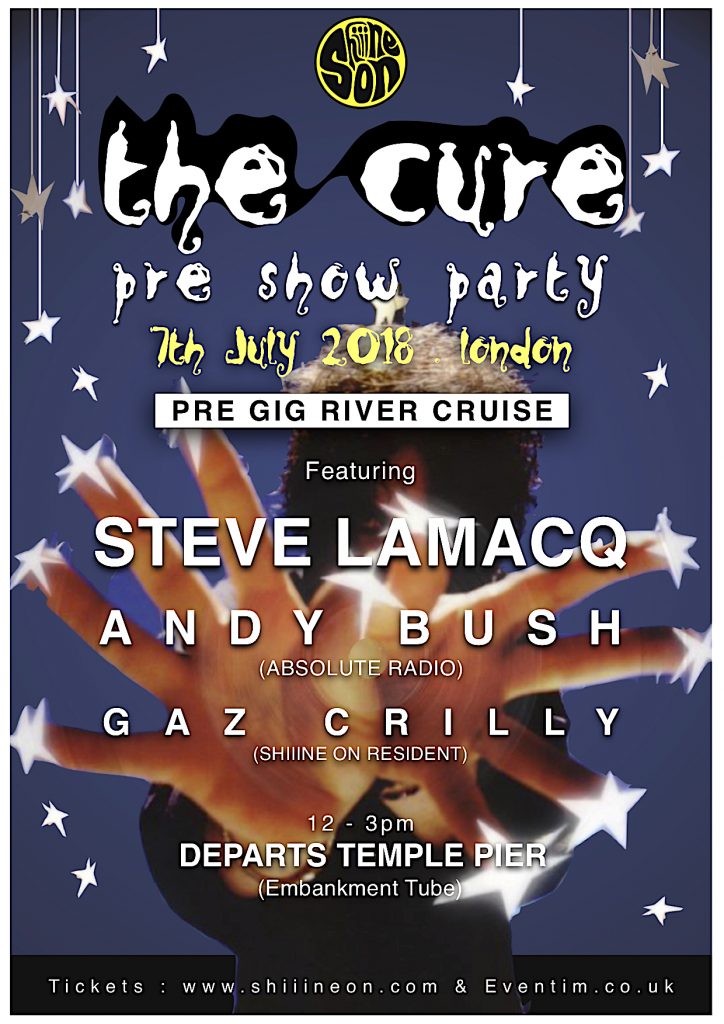 Shiiine On are delighted to announce two Summer parties in London on 7th July 2018 as part of a great day of music in the capital.

With huge shows taking place by The Cure at Hyde Park and Noel Gallagher’s High Flying Birds at Old Royal Naval College we have put together a pre-show River Cruise and an after show party featuring True Order, The UK’s best tribute to New Order.

The boat will depart Temple Pier at 12pm and dock again at 3pm taking in all the sites up the Thames whilst the on board entertainment will come from two legendary figures with plenty of time to get to either site from Embankment tube.

First up, we welcome the one and only Steve Lamacq. We don’t need to tell you who he is. He’s simply a legend and one of the most loved characters in the music industry. Steve described his set at last years Shiiine On as one of the most enjoyable sets he has ever played. We are extremely humbled when he praises our events on his weekday BBC Radio 6 show. Thank you Steve.

Also playing tunes on board we have Absolute Radio 90’s very own Andy Bush. Anyone at the Weekender in Minehead last November will vouch for how good this will be. Back to back anthems and forgotten classics will provide the soundtrack to the day. The setlist is up there on that der internet. Shiiine On Resident and all round good egg, Gaz Crilly completes the trio of Dj’s.

After both gigs, our after-show party takes place at the legendary Amersham Arms, New Cross SE14 6TY where True Order will play homage to New Order. They are superb as anyone who managed to get into see them at Shiiine On in 2016 will agree. We welcome back our good pals and stars of the festival, Keep It Social. They will be on the decks once True Order finish till 3am. Expect the unexpected is their musical policy. The band will be onstage at 11.45 so there is plenty of time to get from Hyde Park and Greenwich. New cross is served by excellent transport links and there are 24 hour transport tubes from over the road.

We have a limited number of Cruise + Aftershow tickets, Cruise only and Aftershow only available HERE