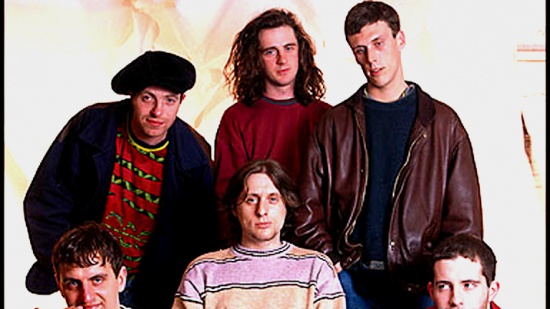 We recently spoke to Happy Mondays drummer & co founder of the band Gaz Whelan , Gaz will be playing a very rare acoustic “Undrugged“ set of Mondays classics along with the odd surprise cover version!

Gaz has selected his own personal top 10 Happy Mondays songs for us – including some great stories & anecdotes about each of them.

Was the nickname of a woman in Chorlton in South Manchester from whom we would get our hash from. She was very bohemian and a kind of ex-hippie. Think she had been a lecturer at Manchester University at some point. She took a shine to us and when we were skint and T.T. would ‘Lay it on’…

Then one day we went round to pay our debts and she had tragically died from a brain haemorrhage which really hit us hard…T.T

This was our name for Paul Ryder yellow Ford Escort. None of us could drive except ‘Horse’ so this was our only conveyance… We lived in it…

I loved this tune and didn’t realise we had recorded it… I thought it was just a demo, then Paul Ryder reminded me it was a B-side on an early single… I had no idea!

Paul Ryder and I started out playing a Motown beat and bass line but Julian Copes ‘World Shut Your Mouth’ was impregnating the airwaves and I got caught up in the harder driven groove.

I always thought the line “How old are you, are you old enough?, should you be in here watching that’” must have come from the 4 screen cinemas in Walkden (Worsley). When I was at school we would travel to watch latest films at ‘Unit 4’ Cinemas. We would pay to watch a Disney film or something and then sneak in to watch and ‘X’ rated film showing in the next cinema unit. Whenever we would get caught this is what they would ask. I don’t think I ever went with the band, this was earlier but seems we all had same experience. I am just guessing as I have no clue where the lyric came from… But hope its from this?

Personally not my favourite. It has a Pavlov’s dog affect on me, it makes me feel hungover.
This came out of a jam session. After Hacienda at about 6am Sunday morning in our rehearsal room. Our room was across from the HaC so instead of going home sometimes we would crash in the tiny room.

Myself, Paul Ryder and Paul Davis were jamming 2 songs… ‘Two Tribes’ Frankie Goes To Hollywood (listen close very apparent) and Kate Bush’s ‘Running Up That Hill’. Most of the track came from Paul Davis’ keyboards as he was kind of leading the jam. He never gets any credit PD, he deserves much, much more.

Or Strap On as we refer to it. I know – very childish.

We only heard the original once in car en route to studio in London. P.D. was playing that piano intro – he was trying to play the Lisa Lisa tune “Tonight I’m gonna take you home”, if you listen to that tune and slow it down and break it up you have that intro. It took him ages to do and was done in sections and sounded amazing.

I put this drum beat down I nicked from a northern soul song that had been stuck in my head since my youth. I slowed it right down and it sounded groovy and sluggish… perfect! Then Mark Day went in and did this amazing new guitar part, we were all sat in the control room saying we got Mark wrong – he is a guitar genius, we were in a awe!

He then walked back into the control room to hear back what he had just created and entered with the words ‘I need a shit’ .and left! He is a very original guitarist & never gets enough credit in my opinion. He is nothing like the rest of us – which is why it works so well..

I love this track – another song we started with a Drums/Bass jam. We were jamming on Bowie’s ‘Sound and Vision’ If you listen it’s in the same key and same groove.

I remember doing this on ‘The other side of midnight’. It was the first time I watched us on television and thought “this is quite good!”

Great lyrics again….we were obsessed, and I mean obsessed, with the movie ‘Performance’ hence the title and lyrics.

It was always known as ‘E’. Nothing to do with the narcotic, simply because it was in the musical key of ‘E’. Or so we thought (apparently it isn’t). When I saw the album I had no clue what ‘Do It Better’ was. I think the record company chose that title although I could be wrong…
Also my favourite Mondays lyric & there are many many favourites – ‘Stuck a piece of crap in a butcher hat’….

Bit self indulgent but this was the only song completely written around that drum fill. We wrote it in the studio in LA.. Another amazing lyric that in my opinion makes the song – ‘Its pure art room’.

Was originally titled ‘Groovy Afro’ but whilst we were in the studio recording it the Farm release ‘Groovy Train’, so we changed it….

I remember when we had written and recorded it – No vocals yet, when Shaun was ready to record his vocal we were leaving the studio when I heard his first attempt , all I heard was ‘Son i am 30”…. and I knew instantly that this was a classic lyric that would resonate forever…

From the Album ‘Yes Please’ which is most of the bands favourite album.

I remember being in Surrey in the studio and Shaun was recording vocals and he was getting impatient and kept asking the studio to stop the session when the Simpsons came on TV so he could watch and have a break.. During one take he was singing ‘When did the pain start when did the Symptoms begin” – amazing lyric. Then he throws in ‘When did the pain start, when does the SIMPSONS begin”, so it was kept in. I was laughing for ages…absolute classic.
I love everything about this song. It shows the best in every member of the band, its very Happy Mondays in our original form – maybe subconsciously going back to our primeval beginnings just before we split..!