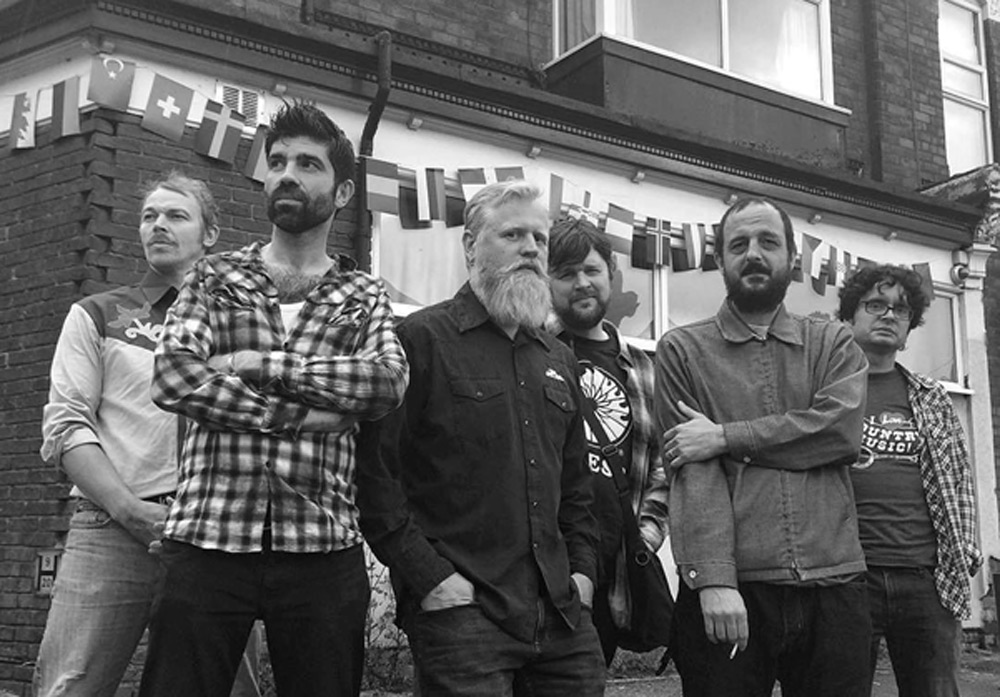 Ahead of their appearance at Shiiine, Birmingham’s rollickin’ country outfit Independent Country are giving away a free 3-track download.

This should be a superb show on Sunday afternoon in Inn On The Green to dust off the hangovers. Here is a bit about the band below:
It started as a rehearsal room gag.

But for the members of rollickin’ country outfit Independent Country, that in-joke has transformed into a bigger musical adventure than they could ever have imagined.

All veterans of the Birmingham indie scene in the 1990s and 200os, the band members collectively have 5 Peel sessions under their belt and plenty of nearly was and almost coulda been stories.
But since forming in 2015, audiences in their home turf of the UK Midlands, and at festivals across the rest of the country, have loved their wry, authentically country and legitimately creative take on tunes by Oasis, Happy Mondays, Stone Roses, The Smiths and the list goes on.

The self-released 2016 debut album “Trailerparklife” transforms 10 songs from the ‘90s indie pop phenomenon into timeless Americana with songwriting and arranging flair reaching far beyond note-for-note parodies. The LP has sold well since its December release and has fully funded the follow-up, expected next year.

Lead singer Chips Hamilton explains how the band came about: “We’re all from various Birmingham bands – between us we have five Peel Sessions under our belts. We all grew up playing indie music before going on to play folk, country or rock.

“The idea for Independent Country probably started years ago when Doc Campbell and I were playing in a previous band and, for a joke, started playing Rio by Duran Duran as if it was from one of those Rick Rubin/Johnny Cash albums… more baritone gloom, no yachts, fewer espadrilles.

“Later, I started playing about with indie tunes in a country style for fun and the band started to form around that. Everyone is a great musician and songwriter or arranger in their own right, so the songs have flowered and taken on lives of their own. They were never intended to be standard cover versions or overly-burdened with a country gimmick, the real joy of the album is you can hear how much we enjoy playing together and getting our teeth into these challenges.

“We’ve played festivals across the country in the summer and the reaction we get definitely feels like we’re getting this spirit across. To be honest it took us aback sometimes to see how well it was going down and the trepidation people might have had for a cover band is pretty quickly forgotten. I think we’re really a covers band for people who don’t like cover bands.”

In the hands of Independent Country, the Happy Mondays’ freaky dancing hit “Wrote for Luck” becomes a barn burnin’ foot stomper; Electronic’s “Getting Away With It” transforms into a tear-jerking fiddle & banjo driven waltz and Oasis’ classic “Rock’n’Roll Star” gets gussied up into the greatest Glen Campbell smash hit that Capitol Records never released.

Another highlight is the swinging rockabilly version of “Blues from a Gun” that made The Jesus and Mary Chain lead singer Jim Reid’s day when he heard it (“This is the best thing I have ever heard” he declared on Facebook). The band have gotten approving nods from some of the other bands they “cover”.

“We supported Richard Marsh from Pop Will Eat Itself recently and he loved our version of “Def Con One”. We cover songs by Moose and New Fast Automatic Daffodils and we’ve had nice emails from them. I think when the original artist realises we’re not doing parodies for laughs, they seem to like it.”